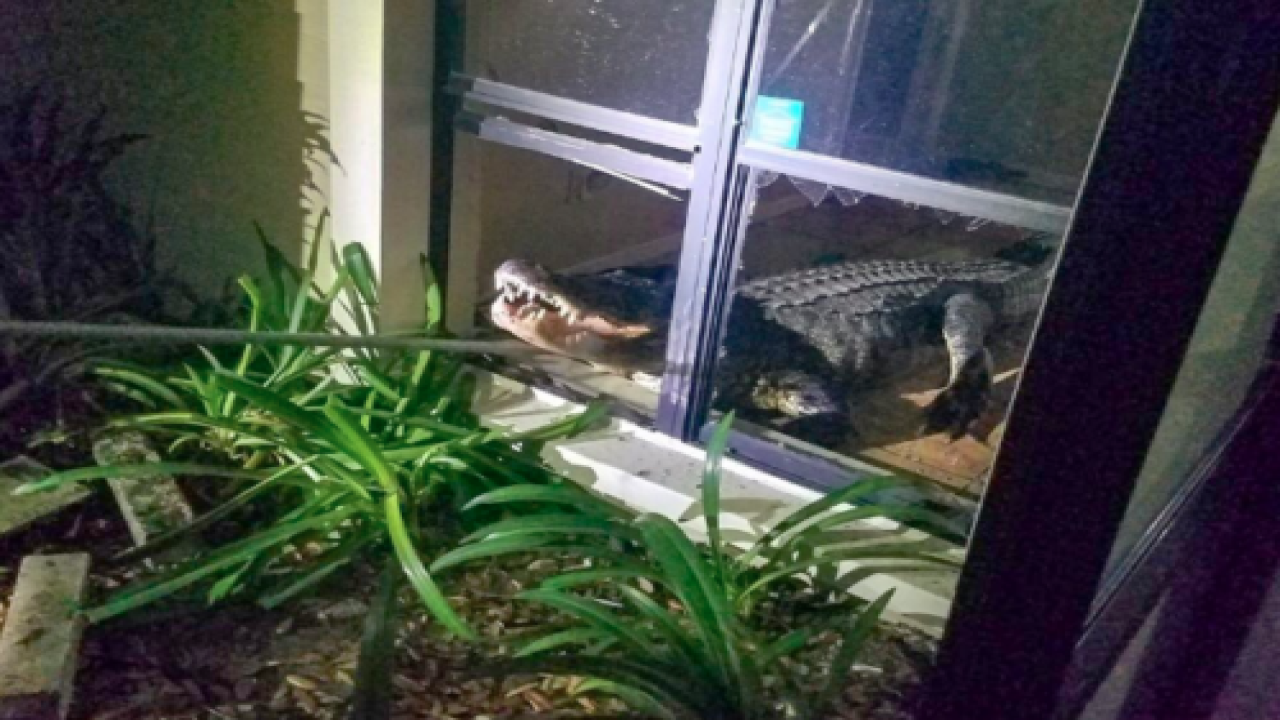 It was like a nightmare come true: A 77-year-old woman in Clearwater, Florida awoke to find an 11-foot alligator in her kitchen.

And he was not happy.

Mary Wischhusen was extremely brave when she heard the noise of a loud crash inside her home around 3:30 a.m. on May 31. She went into her kitchen and saw an alligator looking back at her! Yikes.

“I had this beautiful face staring at me as though he belonged there,” Wischhusen told Spectrum News.

The quick-thinking woman ran into her bedroom for safety, dialed 911 and waited there, hoping the alligator wouldn’t attempt to break through her bedroom door. She said she was so nervous that she played games on her computer in an attempt to keep calm while waiting for help to arrive.

When police arrived to help capture the reptile, he thrashed around, breaking Wischhusen’s wine bottles.

A newspaper delivery woman named Patricia Pecora said she saw the gator unsuccessfully attempting to get into a nearby sewer before it broke into Wischhusen’s house, so she also made a call to 911 for help.

“It sounded like something had fallen and busted,” Pecora explained. “That’s when I said, ‘I’m calling 911, because that sound, that’s not a normal sound.”

The male alligator had broken some windows, which were located low to the ground, to get inside Wischhusen’s house, according to police. An alligator trapper assisted with safely removing him.

We know you've been chomping at the bit for more visuals from today's alligator trespassing in Clearwaterð The male alligator was 10 to 11 feet in length. During the apprehension, the alligator knocked over several bottles of wine. The red liquid in the video is wine, not blood. pic.twitter.com/x6ktib6ajl

Thankfully, no one was injured through the whole ordeal. But the gator did put holes in the walls, dent the refrigerator and destroy some furniture. And of course, it ruined the red wine! (“The good stuff!” Wischhusen joked.)

Following his capture, he may now become a part of private alligator farm in Fort Meade, Florida, CNN reports.

It looks like this alligator was not the only snappy creature in Clearwater who needed relocation: the Clearwater Police Department recently tweeted some photos of a police officer removing a smaller alligator from a Super 8.

“It’s a jungle out there sometimes,” the tweet read. “That’s what Officer Bingham found out today when the manager of the Super 8 on U.S. 19 called about a suspicious subject hanging out in front of Rooms 114 and 115. The critter was relocated to a much more suitable location — a nearby lake.”

It’s a jungle out there sometimes. That’s what Officer Bingham found out today when the manager of the Super 8 on U.S. 19 called about a suspicious subject hanging out in front of Rooms 114 and 115. The critter was relocated to a much more suitable location — a nearby lake. pic.twitter.com/YTb3eeCVpS

Perhaps she was just looking for the mini-bar?