'Game of Thrones' Episode 4 recap: There are no happy endings here 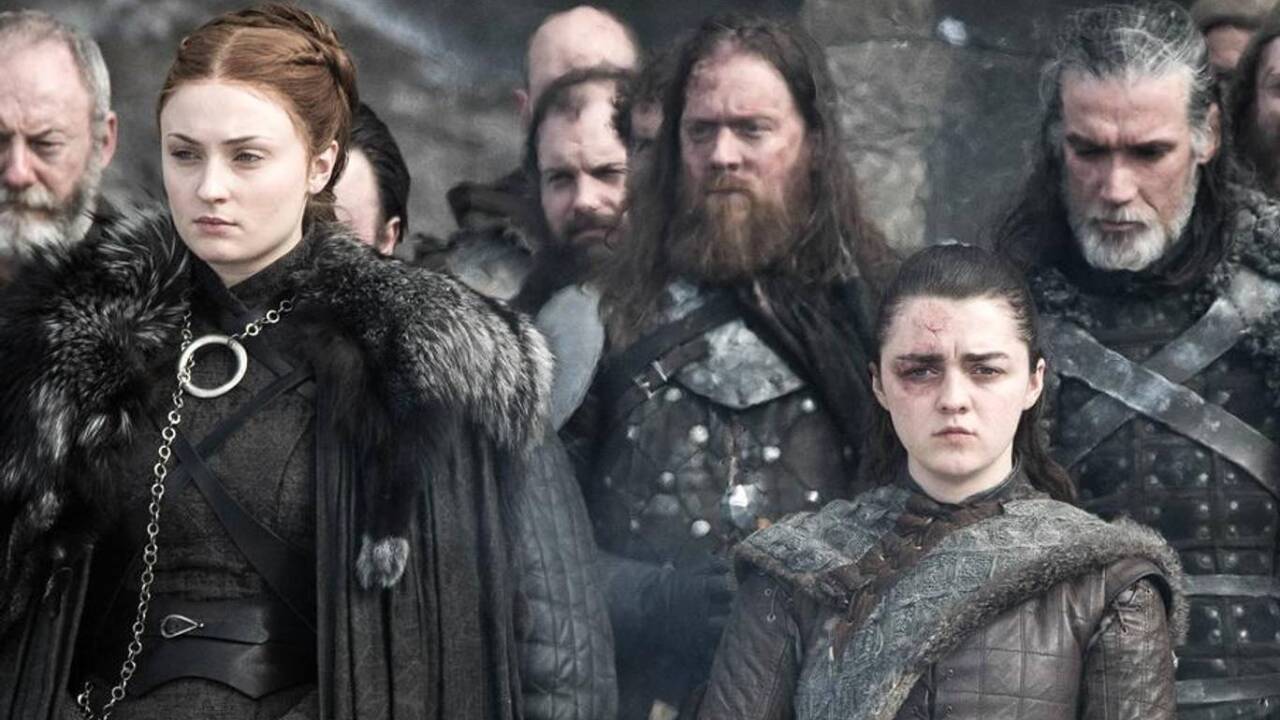 Spoiler alert: If you haven't watched Season 8, Episode 4 of "Game of Thrones," turn your vulnerable armada around and head for safety, because this whole post is a giant spoiler.

Hello and welcome back to suffering. If you thought we were safe for a little bit after the Battle of Winterfell, then the second half of this episode probably hit you like a giant bolt in the soft underbelly of your soul. As the grotesque specter of Season 3 Ramsay Bolton constantly reminds us, "If you think this has a happy ending, you haven't been paying attention."

Yes, there will be plenty of time to mourn later, but first, it's time for feasting (and another word that starts with "f" that we can't print here)!

The Night King is vanquished, and the sun has risen on another day in Winterfell. After the dead are burned and Daenerys gives one last platonic, goodbye buddy kiss to poor old Jorah, the heroes of Winterfell party down. Drinking games are played, significant political side-eyes between Daenerys and Sansa are exchanged, and Tormund vomits. All in all, a good time.

However, under her smile, Dany is in serious "conceal, don't feel" mode. She sees how people admire Jon and his whole coming back from the dead act, and it's obvious she's having doubts about how he really plays into her Iron Throne endgame. In the spirit of conviviality, she singles out Gendry, legitimizes him as a Baratheon and makes him the Lord of Storm's End. It's generous, but Tyrion calls the move for what it is: A political maneuver to plant some loyalty in the great houses of Westeros.

Absolutely none of this matters to Gendry, who in the span of a few days has managed to seal the deal with his childhood crush, survive an epic wight battle and get promoted from poor blacksmith to full-on lord. Unfortunately, his winning streak comes to a screeching halt when he proposes to Arya and she very obviously rejects him. Did he really think his stabby secretive little lady would want to play house in the Stormlands? You know nothing, Gendry Baratheon.

Elsewhere, another coupling goes a bit more smoothly. After a night of painfully obvious flirting, Brienne and Jaime finally hook up. For all of his bravado, Jaime is a truly terrible seducer and most of their foreplay involves being exasperated while trying to take off their clothes, but it's still cute. Somewhere, Tormund is crying into his drinking horn.

As the air of celebration begins to dissipate, it's time to talk next steps. Jon and Daenerys meet up and share a meaningful embrace that packs all the romantic chemistry of two pieces of day-old romaine lettuce being mushed together. Dany tells Jon she loves him, but it appears they're having second thoughts about the resiliency of their relationship. Is it because they're related and that's weird? Of course not. Dany wants him to keep his lineage a secret from everyone forever to avoid casting doubt on her rule, and Jon is soft and has no interest in ruling the Seven Kingdoms, so he agrees.

Surprise! That promise lasts about 2.5 seconds, because Jon breaks down during a Stark family meeting with Sansa, Arya and Bran and tells his sisters the whole ugly truth. Despite making them pinky swear to not tell anyone else, Sansa tells Tyrion who tells Varys, and at that point, as Varys so wisely says, it's no longer a secret. It's information.

Meanwhile, there's a whole other war waiting to be fought against Cersei, who has been biding her time by building up a human moat inside the Red Keep and lying to her briny lover about being pregnant with his child. You know, normal Cersei things. In preparation for battle, Daenerys and company take their ships to Dragonstone, while Jon and his northern allies mount up and ride south to meet them in King's Landing.

Suddenly, in the flap of a dragon's wing, it all goes to hell. Euron's fleet attacks Daenerys and company en route to Dragonstone, and with three well-placed bolts from those fancy scorpion contraptions, Rhaegal goes down in a horrifying cascade of blood. Don't ask how the Greyjoy bannermen got so many of those intricate, heavy machines, or why they were so consistently accurate, or how they were all reloaded so quickly. We live in a post-Night King world. Anything is possible.

The Targaryen fleet is overcome and Missandei is captured. In a bid to reason with Cersei and save Missandei's life, Daenerys, Tyrion, Varys and Grey Worm meet with Cersei, Euron, and all of their assorted monsters outside the gates of Kings Landing. Tyrion tries to use his pretty words to convince his sister not to start a war that will inevitably cost thousands of innocent lives and pull almost everyone into a pit of death and despair, but his sparkling rhetoric isn't what it used to be.

Cersei is unmoved, and has the Mountain straight up BEHEAD MISSANDEI. The gall! The cruelty! No sumptuous red Lannister murderin' outfit is fabulous enough to excuse such a crime. Daenerys' anguished face says it all as she walks away from the horror: Dracarys. Burn it all down.

Is this the last we're going to see of Tormund and the Free Folk? Of Sam and Gilly? Of Ghost? Granted, if it is, that's probably for the best. Getting peacefully shuffled out of the narrative is way better than dying.

What's Sansa's next move? We get it, she doesn't trust Daenerys, and the looks she shared with Tyrion were deeply conspiratorial. But how is she going to influence politics at large when most of the players are headed south and she's in Winterfell?

Why don't Dany and Jon just get married and stop with this silly political drama? Props to Varys for being the first person to explicitly address the fact that Dany is Jon's aunt, but still, given the gravity of the situation and the Targaryen's propensity for inbreeding, it kind of feels like the practical solution.

"What kind of person climbs on a f****** dragon? A madman. Or a king!" Tormund Giantsbane, future Presidential campaign manager.

Fans have been waiting for a reunion between the Hound and his little bird, and their conversation in the great hall did not disappoint. True to form, The Hound was both shockingly crass and gentle, noting Sansa was "broken in" by Ramsay and then musing, almost softly, that it wouldn't have happened if she had left King's Landing with him when she had the chance. For her part, Sansa gave as good as she got, and even coaxed a laugh from her old friend when she revealed the weapon she chose to put an end to Ramsay's cruelty: Hounds! Ha! Only Sandor Clegane would find that hilarious.

After a short but satisfying voyage, the SS Gendrya has returned to port and been respectfully decommissioned. Understandably, Gendry wants to wife up Miss Kingslayer II and settle down at Storm's End as soon as possible. And understandably, Arya isn't about that life right now.

In a critical moment of character development, Jaime Lannister sleeps with a woman who isn't related to him. Alas, it appears he'd rather return to his sister's manipulative chaos than roll around in the bed furs with a wholesome lady knight. Toot toot! The Jame Redemption Train is in grave danger of being derailed.

Ugh, these PEOPLE. It's infuriating that Euron has such a heavy hand in Cersei's machinations, considering he only properly entered the game last season. But this whole pregnancy thing throws a wrench in their cursed union. Is Cersei lying about the parentage (the baby is actually Jaime's) out of convenience, or does she have betrayal on the mind?

The other kind of ship watch

So Dany and her dragons were flying high above the sea and none of them spotted Euron and his flamboyant array of kraken figureheads? What, does he command a fleet of stealth drones? Why does this drunk Panic at the Disco-looking pirate keep winning?

102 deaths and an infinite number of tears

Both Stark sisters made Sandor Clegane, the most miserable man to ever sulk about the Seven Kingdoms, smile and laugh. A true blessing.

Hmm. In this episode, Gendry is referred to as Gendry Rivers, and that surname indicates he's a bastard from the Riverlands. However, by canon he's actually Gendry Waters, since he was born in Flea Bottom, in the Crownlands.

Tyrion and Jamie: [talk about sex for 30 seconds]
Ser Bronn, arriving at this very moment after traveling literally hundreds of miles to kill them: HIYOOO what's up gentlemen what did I miss?

Sam and Gilly are having another baby? In THIS economy?!

Okay, let's get real for a minute. Yes, this is "Game of Thrones." Yes, anyone could die at any time, even good people who shouldn't. But Missandei deserved better than this!

Freed from a brutal system of chattel slavery, Missandei was given the opportunity to use her skills and intelligence to make a difference in the world, to forge her own identity and fall in love. Of course she was brave to her very last word, but it's a shame she died with so little agency — and in chains, nonetheless! Her death wasn't a redemptive personal choice, like Theon's; a sacrifice or a prophecy, like Melisandre's or Beric's; or even, in general, a product of her own decisions (here's looking at you, Robb). Plus, it needs to be said: She was one of the only people of color in this whole story, and if you think that doesn't matter in Westeros, just remember the way those rude little Winterfell urchins treated her.

It's not the fact that she died. Valar Morghulis, she'd tell you herself. It's the idea that she died mainly to serve as traumatic motivation for someone else (who, albeit, truly loved and respected her) that's a huge, huge bummer. Rest easy, sweet butterfly queen.

Dany is not going to take this well

Daenerys spent six seasons amassing armies, dragons and beloved advisors so she could come to Westeros aaand...they're all gone. She's lost Viserion and Rhaegal, the whole Dothraki horde and half the Unsullied, plus Jorah and Missandei, and what does she have to show for it? A mopey incest-y boyfriend, gossipy seneschals and a diluted claim to the Iron Throne? She is probably this close to losing it. Can you blame her?