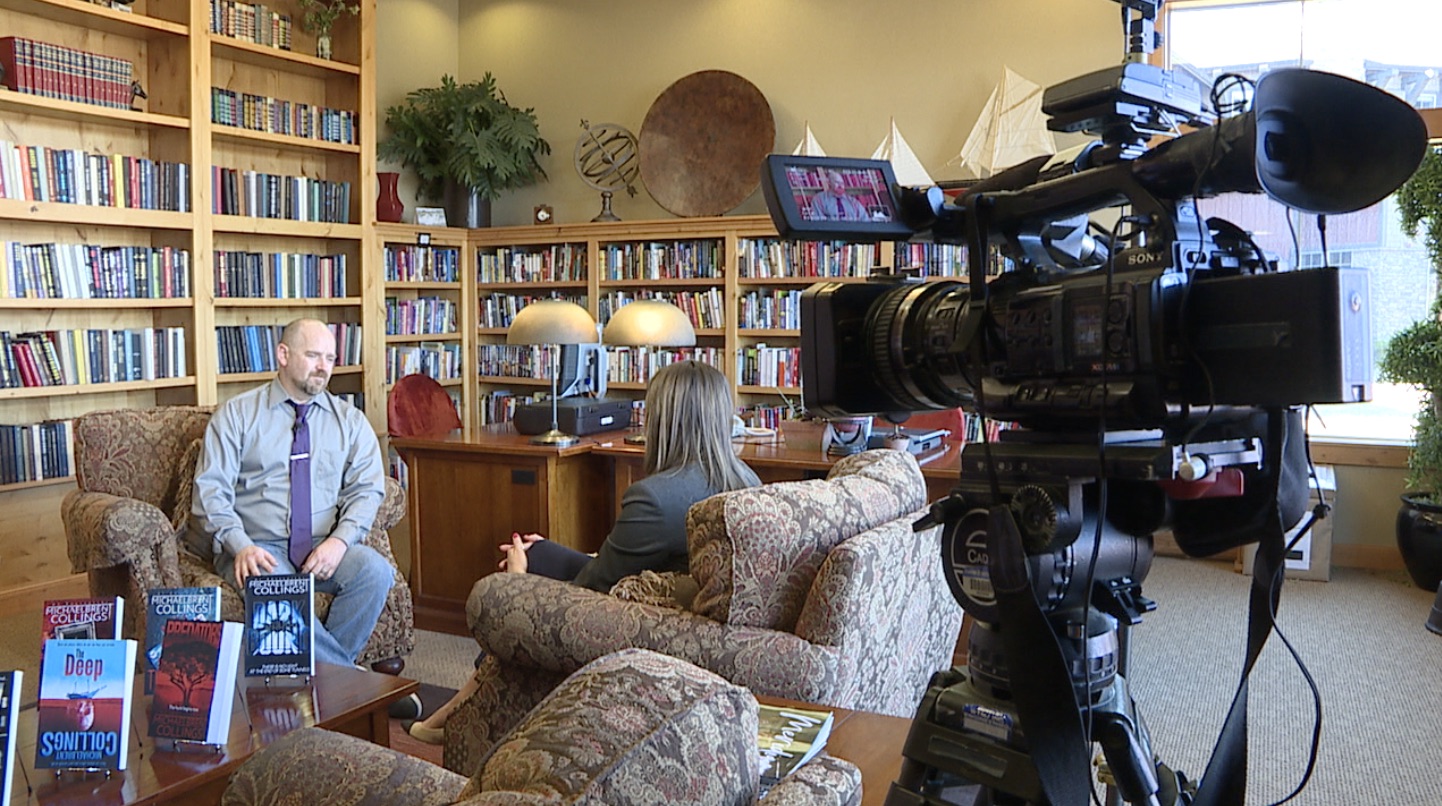 One prolific local author is inspiring readers to not only have empathy for each other, but to fight to find the light in your life again -- no matter how dark life gets.

IDAHO — For about two years now in our Finding Hope series, 6 On Your Side has been committed to telling stories that break stigmas relating to mental health. In this morning’s installment, we take a look at how one prolific local author is inspiring readers to not only have empathy for each other, but to fight to find the light in your life again -- no matter how dark life gets.

“As though it was looking straight into heaven, into the eyes of loved ones and into a place where there was nothing but light — a place where there were no monsters, no demons, only heroes, and only love," said Troy Lambert, reading the last line of Michaelbrent Collings' novel, Apparition.

It’s hard to believe that is the last line in a novel written by an author responsible for books scary enough to make you scream.

"I find horror to be the most potentially redemptive genre," said Collings.

"We can have these negative places, we can watch bad things happen to good people, because... what are books but conflict?” said Lambert, who is a writer himself, and a fan of Collings' work.

But despite how hopeful that last sentence might read, Collings says there's a purpose for ending some of his horror novels this way.

“The best horror stories show us that the characters, and by proxy the reader, can crawl out. They can make themselves better and find the light again," said Collings.

Lambert says these types of story arcs in Collings' novels have done wonders for his ability to persevere through rough times.

“The criminal can be caught, ya know, the dragon can be slain... Sometimes the dragon lives inside us,” said Lambert.

He says they even helped him through some dark bouts of depression after the deterioration of his marriage.

“At that particular time in my life, I was not the hero of my own story," said Lambert.

But Lambert is not alone in those feelings.

“What’s interesting about creative people, is a lot of them, they do have a dark side. They do tend to feel introverted and alone and isolated," said Stacey Smekofske, a professional novel editor from Nampa.

Collings, a Boise-based novelist, says, like his characters, he has fought some demons of his own.

“I have major depressive disorder, suicidal tendencies and psychotic breaks," said Collings. "There’s days where I get out of bed, and everything’s fine, and I’m doing well. And there’s days where sitting up is my big accomplishment that day. So, yeah, I want people to feel like -- just because they’re having that terrible dark moment -- doesn’t mean the story’s over," said Collings.

And it’s that same kind of empathy that, at times, Collings says he’s learned to direct inwards; giving himself the fighting chance to get through those rough days and continue building on his prolific body of work.

“Too many people think of writing as typing, you know? 'Unless I'm actually typing today, I’m not actually writing,'" said Collings. "And I realized some time ago, that going to a movie is writing, as long as I’m sitting there going, ‘How would I do this better? How would I do it differently?’ And so, I’m analyzing story beats, or I'm talking to people, and kind of mining them for content because I have never met anyone in my life who didn’t have a fantastic story.”

And to Collings and his fans, your fantastic story -- matters.

“If somebody has that feeling that they’re in a dark place, um, they need to know that they’re not alone. That’s the number one thing," said Smekofske. "Their voice is important. Their perspective is important... Their words and their experiences mean something to somebody."

“There’s a way to crawl out of the hole," said Lambert. "There's a way to -- the monster can be defeated."

Because as Collings has shown himself time and again, there is hope, always.

“And so whether everybody dies in my book, or whether there's this triumphant hero moment, I hope they do close it and go, 'That wasn’t me. This is me. And I will continue my story today,'" said Collings.