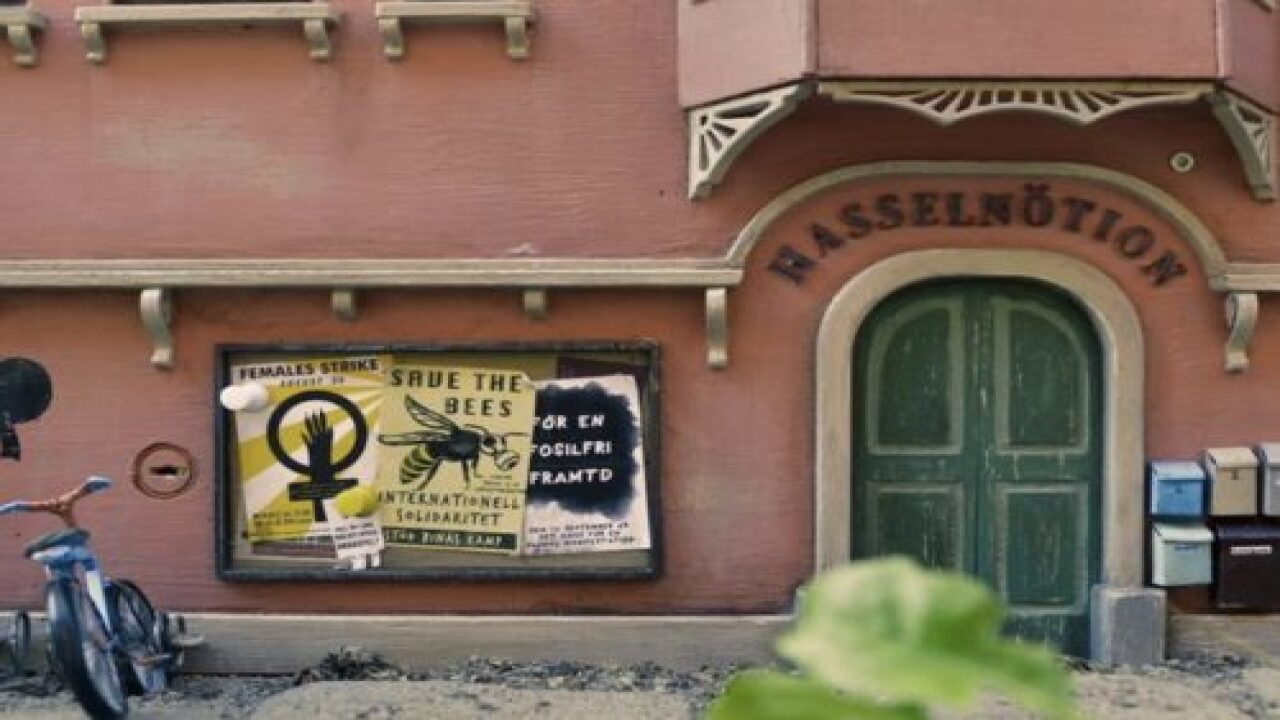 If you dream of living in a Disneyesque world in which tiny animals live full lives alongside humans, then you are sure to become a fan of Anonymouse’s adorably impressive art installations.

Anonymouse is a Sweden-based art collective, made up of two individuals, that is gaining a massive following for some exceptional small-scale work. Since 2016, the artists have been creating delightfully detailed mouse-sized installations alongside several buildings in the coastal city of Malmö in southern Sweden. They have branched out to other Swedish towns, and you can find a few of their 25 or more works in France and the Isle of Man as well.

Check out their romantic French rodent restaurant, “Noix de Vie” (French for “Nuts of Life”), whose next-door neighbor is a charming cheese and crackers shop. It’s built into the basement windows of businesses in the Möllevången neighborhood.

The most studious critters head off to college (how else would there be little mouse teachers, doctors and lawyers?), so of course, they need student housing.

“Χ Σ Η Student housing still has room for a few new tenants,” the artists posted to @anonymouse_mmx. “Regardless if you’re writing a dissertation on Richard Gnawgner or a thesis on the Plague by Albert Camouse, here you can feel like home!”

You can even look through the windows of the apartments for insight into the residents’ lives. The artists add signage, awnings, and furniture, and repurpose everyday objects to make up the super-cute interiors of their little shops and homes.

“Here’s a little peak (sic) into the rooms of our composer and our literary scholar,” Anonymouse posted.

Disney is indeed an inspiration for these projects, according to a Cosmopolitan interview with the artists (who wish to remain anonymous).

“The idea to construct mice-sized scenery emerged in March of this year. It started with us just wanting to build something, and then the focus point shifted onto the stories of Astrid Lindgren and the movies of Walt Disney and Don Bluth,” they told Cosmo. “We believe that at some point most kids like to imagine that there is a world parallel to ours wherein small animals live quite like we do but using things that we have lost.”

Join the more than 145,000 followers of the artists on Instagram, where they post photos of their tiny businesses and homes along with other work, and stay tuned for more. In a recent post (shown above), they teased a culmination to their work (which we roughly translated from Swedish).

“We would very much like to continue to invite you to our miniatures and we have already planned a really good end to our adventure,” they wrote. “A conclusion that could please young and old in the public interest. And we can promise that until then we want to continue to do street art aimed at children and try to bring some magic into everyday life.”

Thanks for the magic, Anonymouse.