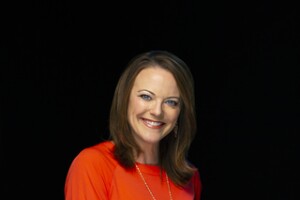 Six On Your Side Anchor

Michelle Edmonds has been a driving force in our newsroom - and on the anchor desk - since joining Idaho News 6 in 2004.

Michelle's influence is apparent everywhere, but perhaps most notably in all things "community." Having two children of her own inspired Michelle to launch the "Community Baby Shower," a now-annual event aimed at ensuring that every Treasure Valley newborn has a happy, healthy start. Also, Michelle doesn't just "talk the talk;" she "walks the walk" in events like the Komen Race for the Cure and See Spot Walk, the latter of which she graciously shares the spotlight with her spokesdog Woodrow, who incidentally was tail-waggingly adopted from a shelter himself.

Michelle's career path included an internship in Sacramento, reporting in Pocatello, and anchoring in Grand Rapids, Michigan, prior to landing in Boise.

But that's just a part of her geography.

Michelle loves to travel and has navigated 38 states on her way to all 50. That's okay with us - as long as she remembers where the studio is. In fact, if we could be anybody, we just might want to be Michelle Edmonds. Partly because of her talent and commitment, partly because she has a wall full of awards, and partly ‘cause she's never had a cavity in her life --despite the "we're still trying" tradition of donut Fridays in the newsroom!